You’ve likely heard of Heartbleed over the past week. We wanted to share a bit about what it is, steps we have taken to protect our customers and steps you can take to protect yourself across the Web.

Some versions of Norton AntiVirus, Norton Internet Security and Norton 360 were impacted. On April 10th, we distributed updates to these impacted products to stop and block Heartbleed. Norton Accounts used to sign into Norton.com were not impacted. Please refer to our FAQ for more information on how we’re defending against this vulnerability.

Why Heartbleed affects everyone on the Internet

Heartbleed is a bug in some versions of OpenSSL, a set of software tools used widely across the Web for security. This bug may reveal your name, passwords and other private information.

If you visited a website that uses a vulnerable version of OpenSSL during the last two years, your personal information may be compromised. You can use this tool: http://safeweb.norton.com/heartbleed to check if a particular website is currently impacted.

How to protect yourself

Due of the complex nature of this vulnerability, changing your passwords before sites update their version of OpenSSL won’t fully protect you. Here are some simple steps you can take as a precaution:

You can learn more about Heartbleed and its impact to consumers by checking out our FAQ or by following the Norton Protection Blog.

Heartbleed Bug: What You Need to Know and Security Tips

What is Heartbleed? Symantec is continuing to track this OpenSSL bug discovered recently and its implications for consumers. Symantec has created a site devoted to Heartbleed for further information.

“Heartbleed” a name that security researchers have given to a serious bug found in a very common piece of software used by many websites. The software in question is called OpenSSL and is used to encrypt the information that you send to and from websites, such as your login name and password or other sensitive information. You can usually recognize when websites encrypt information when you see a little closed padlock near the address of the website in your browser.

Unfortunately there are many different software implementations used to implement this encryption and there is no easy way to know whether or not a given website is running the particular version of OpenSSL that this bug is present in. We believe most large websites reacted quickly to the news of the ‘heartbleed’ bug and fixed it, however it will likely take a very long time for every website to do so.

Here are some tips to keep in mind over the coming weeks and months to help ensure the safety of your sensitive information as you surf and interact online:

Finally, if you are looking for something a little more technical on the background to this bug, we’ve got a lot more detail in a blog entry written up by one of our security researchers here: Heartbleed Bug Poses Serious Threat to Unpatched Servers (below).

A newly discovered vulnerability in OpenSSL, one of the most commonly used implementations of the SSL and TLS cryptographic protocols, presents an immediate and serious danger to any unpatched server. The bug, known as Heartbleed, allows attackers to intercept secure communications and steal sensitive information such as login credentials, personal data, or even decryption keys.

Heartbleed, or the OpenSSL TLS ‘heartbeat’ Extension Information Disclosure Vulnerability (CVE-2014-0160), affects a component of OpenSSL known as Heartbeat. OpenSSL is one of the most widely used, open source implementations of the SSL (Secure Sockets Layer) and TLS (Transport Layer Security) protocols.

Heartbeat is an extension to the TLS protocol that allows a TLS session to be kept alive, even if no real communication has occurred for some time. The feature will verify that both computers are still connected and available for communication. It also saves the user the trouble of having to reenter their credentials to establish another secure connection if the original connection is dropped.

How does it work? Heartbeat sends a message to the OpenSSL server, which in turn relays that message back to the sender, verifying the connection. The message contains two components, a packet of data known as the payload which can be up to 64KB and information on the size of the payload.

However, the Heartbleed vulnerability in OpenSSL allows an attacker to spoof the information on the payload size. For example, they could send a payload of just one kilobyte in size, but state that it is 64KB.

How an OpenSSL server deals with this malformed Heartbeat message is key to the danger this vulnerability poses. It does not attempt to verify that the payload is the same size as stated by the message. Instead it assumes that the payload is the correct size and attempts to send it back to the computer it came from. However, since it doesn’t have the full 64KB of data it will instead automatically “pad out” the payload with data stored next to it in the application’s memory. If the server received a 1KB payload, it will thus send it back along with 63KB of other data stored in its memory. This could include the login credentials of a user, personal data, or even, in some cases, session and private encryption keys.

Private encryption keys may be the most difficult thing to steal using this attack. Data is stored in a sequential fashion, with new data stored in front of older data. Encryption keys will usually be stored “behind” the payload in memory, meaning they are less likely to be accessed. Content from current SSL/TLS sessions is the type of data most likely to be at risk.

The Heartbleed bug is the latest in a series of SSL/TLS vulnerabilities uncovered this year. TLS and its older predecessor SSL are both secure protocols for Internet communication and work by encrypting traffic between two computers.

In February, Apple had to patch two critical vulnerabilities affecting SSL in its software. It first issued an update for its mobile operating system iOS, which patched a flaw that enabled an attacker with a privileged network position to capture or modify data in sessions protected by SSL/TLS. Days later, a second update was issued, this time for its desktop operating system OS X, after it was discovered that the same vulnerability also affected it.

In March, a certificate vulnerability was found in security library GnuTLS, which is used in a large number of Linux versions, including Red Hat desktop and server products, and Ubuntu and Debian distributions of the operating system.

GnuTLS is an open source software implementation of SSL/TLS. The bug meant that GnuTLS failed to correctly handle some errors that could occur when verifying a security certificate. This could allow an attacker to use a specially crafted certificate to trick GnuTLS into trusting a malicious website. The vulnerability was immediately patched by GnuTLS.

Heartbleed is by far the most serious vulnerability in SSL/TLS to be uncovered of late. The nature of the bug and the fact that affects one of the most widely used implementations of SSL/TLS means that it poses an immediate risk.

To use the Certificate Checker, click on Check your cerftificate installation and then enter your website URL.

The maps below show recent visitors to this page. Click an image for a larger gallery view. 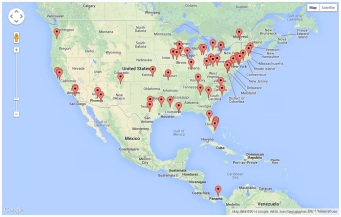 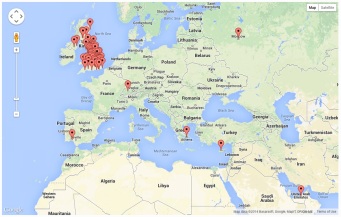 It has been now five days since details emerged regarding the “Heartbleed” vulnerability in OpenSSL. During this time we have been researching the impact of the vulnerability, tracking the patch states of popular websites, and monitoring attacks. So what have we learned?

Most popular sites are no longer vulnerable

It is possible that your data may have been stolen prior to a website being updated. To mitigate against this ensure that you do not reuse passwords across multiple sites.

Yes, you should change your passwords

There has been some contradictory information regarding whether users should change their passwords. Based on our examination of the most popular websites above, it should now be safe to change the passwords for most of your online accounts.

If you have any doubt, Symantec offers the following tool to check whether a website is vulnerable to Heartbleed:

The problem is serious, but a doomsday scenario is unlikely

Heartbleed could be used by attackers to steal personal data such as usernames and passwords—and doing so is relatively easy. However one of the biggest concerns is that the vulnerability could be used to steal the private keys which are used to encrypt communications with websites. By stealing these keys, attackers could eavesdrop on communications or set up fake websites which impersonate legitimate websites allowing them access to even more data. As stated in our previous blog, stealing these keys is very difficult. Some researchers have been successful in stealing keys using Heartbleed, but each case required specific circumstances to be met; in particular, keys are more likely to be exposed only at the moment after the web server is started.

Heartbleed is not being widely used by attackers

Our monitoring has shown that while there is widespread scanning for vulnerable websites, most of this scanning seems to be originating from researchers. We have witnessed relatively few mass scans for the Heartbleed vulnerability originating from attackers. Attackers could be targeting specific sites but, fortunately, the most popular sites are no longer affected.

Symantec IPS signature 27517, Attack: OpenSSL Heartbleed CVE-2014-0160 3, has been released and will detect and block attempts to exploit Heartbleed on vulnerable servers.

For the latest information on Heartbleed, including how to minimize your risk, please visit the Symantec Heartbleed outbreak page: